Home » The Adventures of an Unadventurous Camper

I can call myself unadventurous because that’s truly my nature, I don’t like traveling off the beaten path, not any beaten path. I don’t like dirt under my fingernails, I like flush toilets, my toes don’t like shoes, they prefer flip flops and after a day camping in the dirt, a long hot bath was calling their names. Oh, wait! Not only did I not have a bathtub but I also had no running water let alone hot water!! I’ve done the camping thing for years and years and my plan was hotels and room service, but the husband, Mr. Wright, had other plans. He decided to build an off-road, or overlanding rig, I jokingly call it his mid-life crisis! He joined Overland Bound in 2016 and quickly became involved with the Inland Empire Group, doing their monthly meet-ups, and attended 2 of the Overland Rallies at Bald Mountain with our son. No guilt there for me, you two go have fun and do some father-son bonding. That totally works for me. But in year 3, I was asked to go months in advance if the passenger seat just happened to be empty. “Well” sure I say “Why not!” fully expecting that I wouldn’t have to go. Well, was I disappointed when my plans came to a screeching halt and I found myself co-pilot for this trip. I can’t say I was hooked, but it was fun. Fun enough that I started going on the monthly meet-ups. The first one I went on I just stayed in the truck, using the cold as an excuse, but it was mostly because I didn’t know anyone. Then I did the Ocotillo Wells Tierra Del Sol trip and started to feel the excitement! I know you are probably wondering about Alabama Hills! 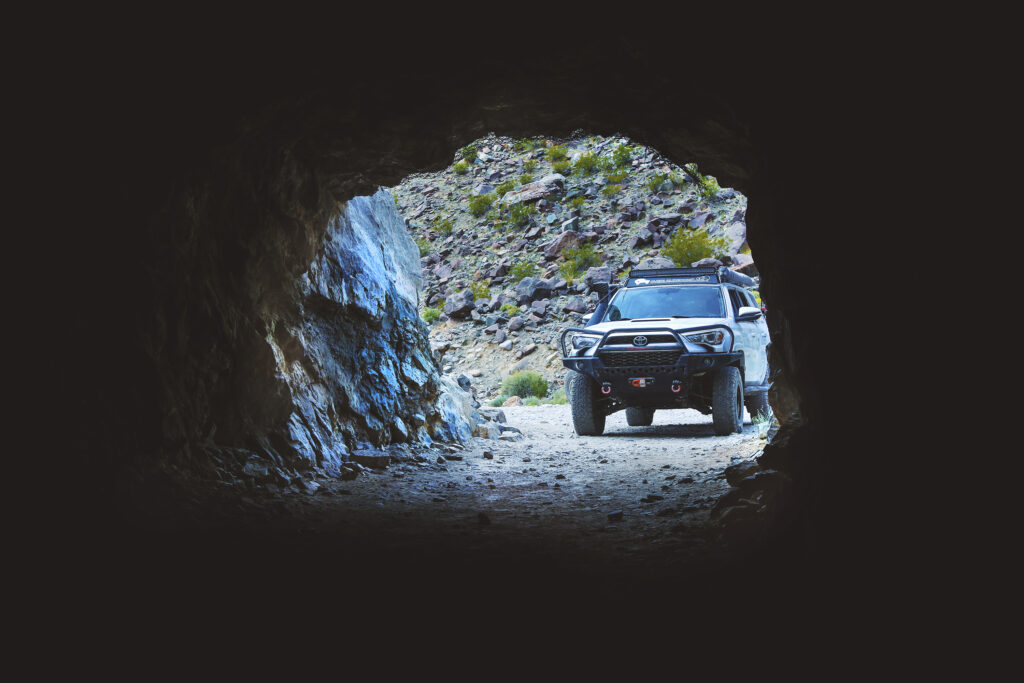 On April 26th, 9 rigs met up at the Pilot gas station on the 395 just outside of Adelanto and caravaned to Alabama Hills, if your wondering where that is you hang a left halfway thru Lone Pine. Before you know it you are being welcomed to Alabama Hills Recreation Land. Talk about amazing! God was really showing off His ability to create some of the most spectacular landscaping! We met up with Monty Sauser who had picked a nice little boxed-in canyon for us to spend the next 3 days in.

Not only does Alabama Hills sit at the feet of Mt. Whitney it also boasts of the over 800 movies that have been filmed there. As we made our trek down Movie Flats, our tour guide, Mr. Wright, pointed out the various movie set locations for some well-known productions, quite honestly I was so dazzled by the rocks that I was only half paying attention. From there we made a quick incline up the mountain to the Mt. Whitney Portal. Boy oh boy, we were in for such a rare treat, not only was there at least a 20-degree drop in temperature, but the Mt. Whitney snowpack is slowly melting and our eyes beheld the most beautiful waterfall. (Okay, so I’ve not seen many waterfalls so it was just Wow Amazing to me!)

The Mt. Whitney Portal was definitely the highlight of the trip for me. So you might be wondering where the unadventurous camper comes in, well let me tell you. The Saturday run was up to a local ghost town Cerro Gordo, the most well-preserved ghost town in California. The mine ultimately produced 4.5 million ounces from a hole 1150’ deep with 7 levels of tunnels, totaling 37 miles. I have to tell you, I don’t do roads that are only wide enough for one vehicle at a time, but I did it, not too much anxiety there. It was the next stop, Reward Mine. So we were the first to arrive as Mr. Wright led this trail, husband and son took off with only the lights from their cell phones. No, I didn’t go, are you kidding me, I walked 20 ft into the entrance, I’m sorry my personal preference is hotter the better, can I tell you it was flipping cold in there. Anyways my ferocious Doberman, CJ, is known for being a couch potato, her feet were so tender by this time she opted out for any more adventures using her own legs and chose to stay in the truck, and somebody had to stay and watch her!! Seemed like I sat there forever waiting for everyone else to come up the hill. By the time Dom and Cliff got there, I had no idea how long Doug and our son had been in the tunnels. They took off with the flashlights, yes they were better prepared. Not long after that they come walking out but just the two of them, they said they reached a Y in the road and didn’t know which way the guys had gone so they came on back. Yes, my mind went there, I’m going to have to go into the abyss and drag their butts out of there!!

I was quickly distracted by the arrival of everyone else and watched as they all disappeared into the big black hole. An eternity later they all emerged with the excitement of only what I can describe as crazy men, they were going to drive their vehicles, at least the ones that could fit, into the big black abyss, with the possibility of never being seen again! When I was asked to go I said “Oh Hail No” Nope, No Way, No flipping way am I or my poor injured dog going into the big black abyss, and since CJ couldn’t walk the truck was staying out of the big black abyss! That battle was won!! Haha!! Some of those crazy butt guys did it though. Some of the bigger rigs that couldn’t make it backed into the mine entrance for the great poser photo, you would have thought they were just exiting the mine!! It was an amazing weekend all in all and I can’t wait to return to Alabama Hills for more exploring. But next month is the Overland Expo West in Arizona so Alabama Hills will have to wait for another time.